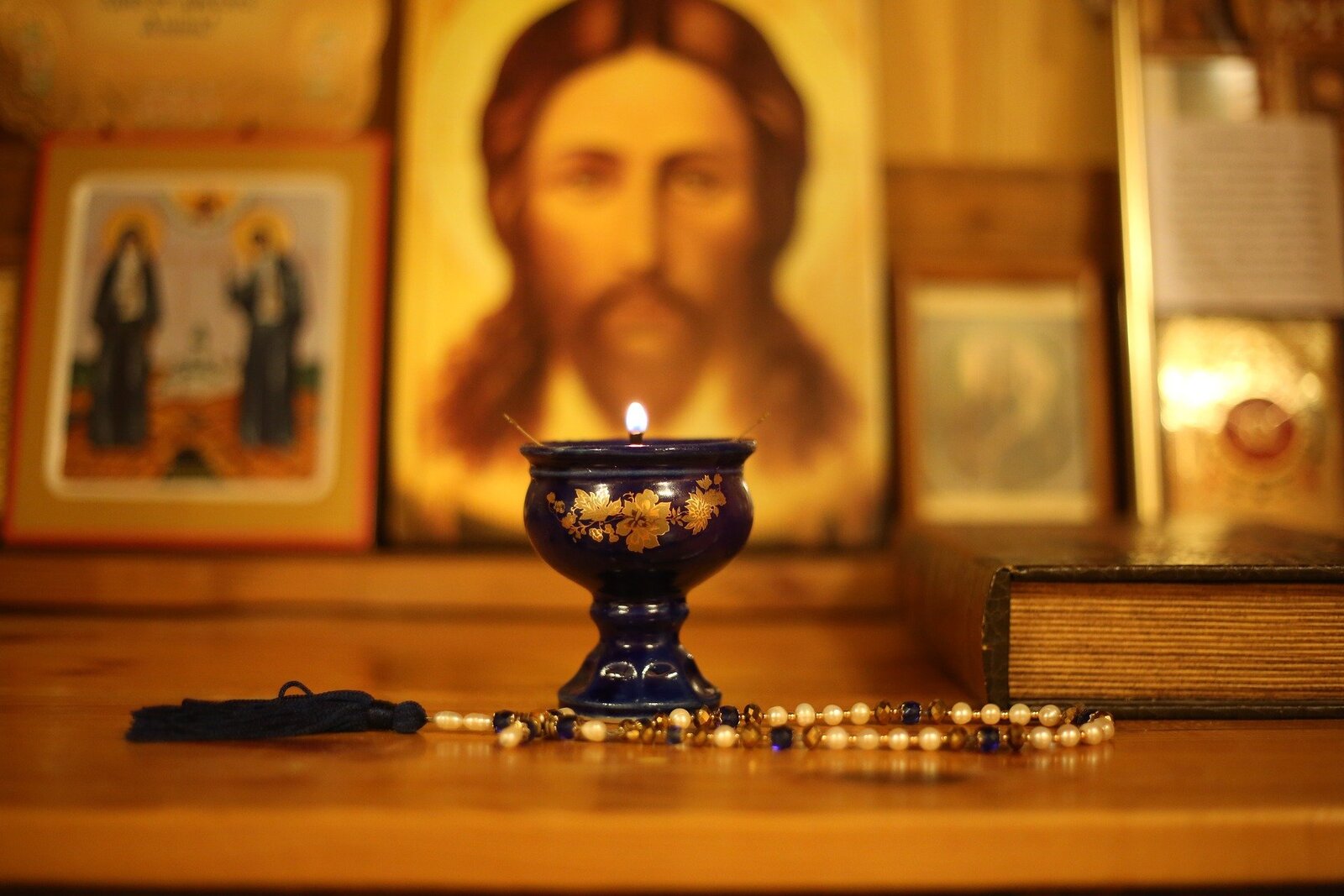 Our Father, who art in Heaven, hallowed be Thy Name; Thy Kingdom come; Thy will be done, on earth as it is in heaven. Give us this day our daily bread; and forgive us our trespasses as we forgive those who trespass against us. And lead us not into temptation, but deliver us from Evil. Amen.

I believe in on God, the Father almighty, Maker of Heaven and earth, and of all things visible and invisible. And in one Lord Jesus Christ, the Son of God, the only-begotten, begotten of the Father before all ages.  Light of light, true God of true God, begotten not made; of one essence with the Father, by whom all things were made.  Who for us men and for our salvation came down from heaven, and was incarnate of the Holy Spirit and the Virgin Mary, and became man.  And was crucified for us under Pontius Pilate and suffered and was buried.  And the third day, He rose again, according to the Scriptures, and ascended into Heaven, and sits at the right hand of the Father; and he shall come again with glory to judge the living and the dead, whose kingdom shall have no end.  And in the Holy Spirit, the Lord, the Giver of Life, who proceeds from the Father; who with the Father and the Son together is worshipped and glorified; who spoke by the prophets.  In one Holy, Catholic, and Apostolic Church.  I acknowledge one Baptism for the remission of sins.  I look for the resurrection of the dead, and the life of the world to come.  Amen.

Thou hast raised me from bed and sleep, O Lord; enlighten my mind and heart, and open my lips, that I may praise Thee, O Holy Trinity: Holy, Holy, Holy art Thou, O Lord.  For the sake of the Mother of God, have mercy upon us.

(Before going to sleep) O Lord our God, whatever I have sinned this day in word, deed or thought, forgive me, for Thou art gracious and lovest mankind. Grant me peaceful and undisturbed sleep.  Send me thy guardian angel to shield me and protect me from every evil; for Thou art the Guardian of our souls and bodies, and unto Thee we ascribe Glory, to the Father and to the Son and to the Holy Spirit, now and ever, and unto ages of ages.  Amen.

Prayer to the Holy Spirit

O Heavenly King, the Comforter, the Spirit of Truth who art everywhere and fillest all things. Treasury of Blessings, and Giver of Life: Come and abide in us, and cleanse us from every impurity, and save our souls, O Good One.

Prayer to the Most Holy Mother of God

O Theotokos and Virgin rejoice, O Mary, full of grace, the Lord is with you: blessed are you among women and blessed is the Fruit of your womb, for you have borne the Savior of our souls.

Lord Jesus Christ, Son of God, have mercy on me, a sinner. (Repeat as many times as possible for daily prayer)

The Lenten Prayer of St. Ephrem the Syrian

O Lord and Master of my life. Take from me the spirit of sloth, despair, lust of power, and idle talk.

But give rather the spirit of chastity, humility, patience, and love to Thy servant.

Yea, O Lord and King, grant me to see my own transgressions, and not to judge my brother, for blessed art Thou, unto ages of ages. Amen.

The following are the daily readings of The Prologue from Ohrid - a literary work compiled by St. Nikolai of Zica (Velimirovic). Bishop Nikolai is often called the "Serbian Chrysostom" for his theological wisdom and articulateness. His work is a compilation of lives of saints, hymns, reflections, and homilies. It was originally written in Serbian.  The Prologue in Serbian (Srpski/Српски) - Daily Prologue (Пролог)

The Prologue from Ohrid: January 10

Gregory was the brother of Basil the Great. At first, he was only a presbyter since he was married; but when his wife Blessed Theosevia died, Gregory was chosen and consecrated as bishop of Nyssa. He was distinguished by his great secular learning and spiritual experience. He participated at the Second Ecumenical Council (Constantinople, 381 A.D). It is thought that he composed the second half of the Symbol of Faith [The Creed]. He was a great orator, an exegete of Holy Scripture and a theologian. Because of their defeat, the Arians especially attacked him as their worst enemy, so that, during the reign of Emperor Valens, their ally of the same mind, succeeded in ousting Gregory from the episcopal throne and banished him into exile. This Holy Father spent eight years in exile, patiently enduring all miseries and all humiliations. He finally died in old age toward the end of the fourth century and was translated into the Kingdom of God remaining on earth throughout the ages as a great beacon of the Church.

For fourteen years, Ammon prayed to God and struggled to conquer anger within himself. He attained such perfection of goodness, that he was not even conscious that evil existed in the world. He was particularly knowledgeable in Holy Scripture. He died at the beginning of the fifth century.

Marcian was born in Rome. As a presbyter, he lived the remainder of his life in Constantinople during the greater part of the reign of Emperor Marcian and Empress Plucheria. Inheriting enormous wealth from his parents, Marcian generally spent it on two goals: either on building or restoring churches or on charity for the poor. He built two new churches in Constantinople, St. Anastasia and St. Irene, both famous for their beauty and sacredness. When he was asked, "Why do you spend so much on churches?" He replied, "If I had a daughter and wanted to marry her to a nobleman, would I not spend much gold in order to adorn her as a worthy bride? And, here I am adorning the Church, the Bride of Christ." As much as this wonderful man was generous toward the churches and the indigent; so much was he austere, very austere toward himself following the apostolic exhortation: "If we have food and clothing, we shall be content with that" (I Timothy 6:8). It is written about him: "He was totally in God and God in him, and presented himself to God in fullness of years and good works," in the year 471 A.D.

To some, blessed mercy; to some, bold understanding,

To some, a special virgin's purity,

To some, a living love or a correct mind.

According to the strength of one's faith, a new gift, the Spirit adds:

If the faith grows, which moves mountains,

The treasury of the Spirit, then opened is

And, gift upon gift, as rain, descends upon the faithful one.

St. Gregory, because of his great faith,

St. Marcian, because of his great faith,

With heavenly mercy was illuminated.

The light of theology, to Gregory was imparted.

To Marcian was given grace; the chrism of praising.

Your wondrous gifts, from us, do not withhold,

But through the prayers of Your chosen vessels

In the day of the Dreadful Judgment, from condemnation, save us.

Vanity because of clothing occupies special momentum in our time. He who has nothing else of which to be proud becomes proud of his attire. He who would have something more costly than clothes of which to be proud, does he not become proud? Just as gold, which does not come out from the surface of the earth, so it is that neither the spiritual values of a man not show outwardly. It is said, that a certain distinguished philosopher saw a young man who displayed pride in his clothing. He approached the young man and whispered in his ear: "The same fleece was previously worn by a ram, but, nevertheless, he was still a ram!" To be a Christian and to display pride in clothing is more insane than to be an emperor and to be proud of the dust under his feet. While St. Arsenius wore cloth of gold in the royal court, no one called him great. He was called Great only then when he unselfishly gave himself over completely to God and dressed in rags.

To contemplate the lowliness of the Lord Jesus:

1. The lowliness of the King Who was born in a cave;

2. The lowliness of the most wealthy One, Who hungered and thirsted;

3. The lowliness of the Almighty in relationship with the lowly on earth.

About contentment with that which is most necessary to us

"If we have food and clothing, we shall be content with that" (I Timothy 6:8).

The apostles of God taught others that which they themselves fulfilled in their own lives. When they had food and clothing they were content. Even when it occurred that they had neither food nor clothing they were content. For their contentment did not emanate from the outside but emanated from within. Their contentment was not so cheap as the contentment of an animal, but costly, more costly and more rare. Internal contentment, the contentment of peace and love of God in the heart, that is the contentment of greater men, that was the apostolic contentment. In great battles, generals are dressed and fed as ordinary soldiers and they do not seek contentment in food nor in clothes but in victory. Victory is the primary principle of contentment of those who battle. Brethren, Christians are constantly in battle, in battle for the victory of the spirit over the material, in battle for conquest of the higher over the lower, man over beast. Is it not, therefore, absurd to engage in battle and not to worry about victory but to concern oneself with external decorations and ornaments? Is it not foolish to give to one's enemies the marks of identification? Our invisible enemy [Satan] rejoices at our vanity and supports us in every vain thought. The invisible enemy occupies us with every possible unreasonable pettiness and idleness only to impose upon our minds the heavy forgetfulness relative to that for which we are here on earth. The invisible enemy [Satan] presents to us the worthless as important, the irrelevant as essential and that which is detrimental as beneficial only in order to achieve victory and to destroy us forever.

O Lord, Holy, Mighty and Immortal, Who created us from the mud and breathed a living soul into mud, do not allow, O Lord, that the mud overwhelms! Help our spirit that it always be stronger than the earth.

To You be glory and thanks always. Amen.

Confessions can also be made by appointment with Fr. Stevo.